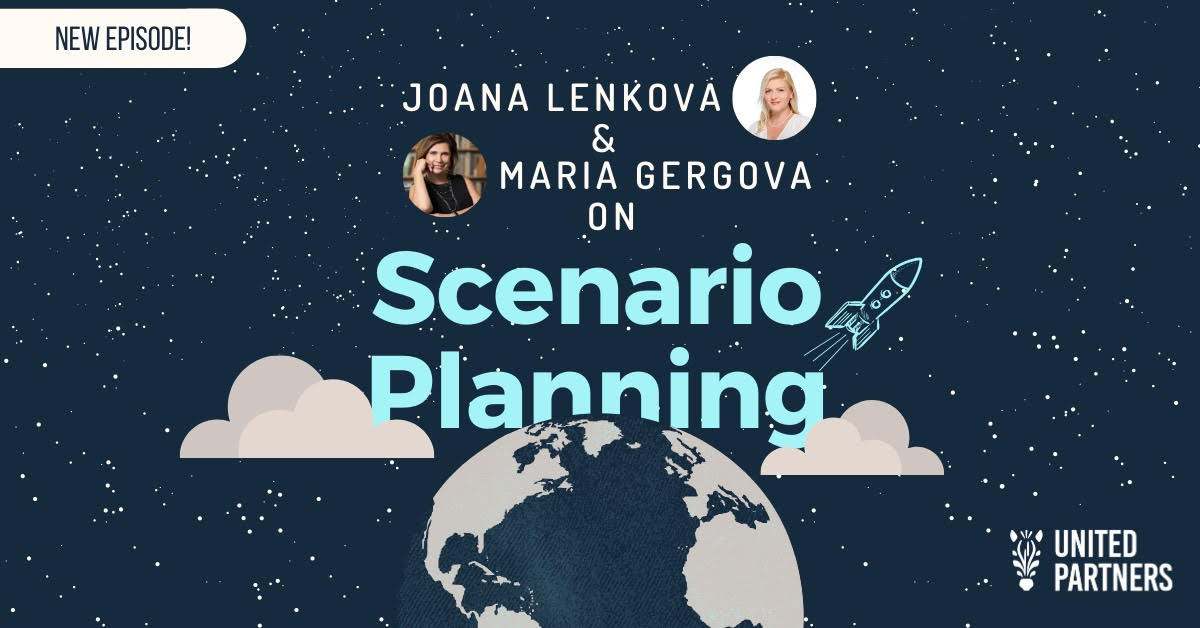 In today’ blog post our guests Maria Gergova-Bengtsson and Joana Lenkova are sharing their thoughts on scenario planning and communications in times of volatility and uncertainty.

Joana is a strategist, and a futurist, based in London, UK. Before setting up her consultancy company Futures Forward in 2019, she was a consumer strategist at The Walt Disney Company in London, where she also led the Futures team in the UK. She currently consults various businesses and governmental organizations in the field of strategy, innovation and foresight. Joana is an Oxford graduate in strategy and innovation, a founding member of the Global Foresight Advisory Council of the Futures School, a member of the Association of Professional Futurists and the Oxford Union.

Maria is the founder and owner of United Partners, one of the leading integrated marketing agencies in Bulgaria. She has been elected as an international PR association president for 2009 and is also the founder and board member of the Bulgarian Association of PR agencies. For the past 20 years, Maria has developed and executed many communication campaigns for clients like Procter and Gamble, IBM, Bayer, Vivacom, Intel, Western Union, the European Commission, Philips, UNICEF, etc. In 2002, she has been announced as PR Specialist of the Year by the Bulgarian PR society. Currently, she is a mentor at Richard Branson`s Center of Entrepreneurship.

Joana: I joined The Walt Disney Company in 2015 as a consumer strategist for Disneyland Paris, based here in the United Kingdom and being responsible for a range of different markets for Disneyland Paris. Everything was great, our strategy was all set for the year ahead, we had all the actions planned and we felt completely in control of the situation. However, one month into the role, all sorts of external forces started to impact the strategy. First, we had the migrant crisis. Then there were the terror attacks in Paris. Then we started hearing about the EU referendum here in the UK, which led to the value of the pound dropping, consumer confidence dropping, and so on. All of these, it was kind of like a cocktail of external factors that started to impact our strategy. This is the moment when I realized that the way that we are doing strategy is not as robust as I was thinking. It just wasn’t robust enough to withhold the pressures that the external environment was throwing at us. And instead of being strategists and spending time thinking about the future, we were constantly busy, reacting and trying to fix the issues. A few months after I joined the company, I became part of The Walt Disneys International’s team of Futurists. I had heard about Scenario Planning before much earlier in my career, but I was never professionally trained to do that. The Futures School training, benefited me a lot since it gave me the tools to navigate uncertainty. I started using the tools, the knowledge, and the thinking which helped me in my traditional strategy role. It inspired me so much that I decided to do a career change and become a futurist. I set up my own company a year ago and I provide consultancy services in Strategic Foresight, while partnering with the Future School to provide training for the EMEA region.

Joana: Strategic Foresight is a methodology and just like strategy, it originated in the military and later on, it was transferred to the business world. It gives us the tools to think about multiple sets of plausible futures and we speak about the future in plural because the future doesn’t exist yet. What we do in Strategic Foresight is we imagine multiple different versions of the future that might happen and anticipate the threats, but not only the threats, also the opportunities that exist in what we call a VUCA world. VUCA stands for volatile, uncertain, complex and ambiguous world. Scenario planning is the most common tool within the strategic foresight field and I’d like to share the methodology that I use because obviously there are many different tools and methodologies. I was trained and I use a methodology called Natural Foresight® developed by KEDGE and the Futures School and it’s is a four-step process. The steps are to Discover, Explore, Map and Create – we use this methodology to identify trends, create patterns and think about their implication on the future, most importantly, what value shifts happen within society. Based on that we create scenarios, but we don’t stop there. Sometimes Strategic Foresight efforts fail within organizations because the intelligence and the knowledge are not integrated into corporate strategy. The final step in the methodology is to take the knowledge from the scenarios and bring it back to today’s actions and strategy.

Joana: Probably the most famous example is the Royal Dutch Shell, because they have had a Strategic Foresight team since the 60s. They anticipated the oil crisis of the early 70s and not only avoided it but even profited from it. That is a very famous example in the field of Strategic Foresight. Other companies I am aware of are IBM, Disney and Rolls Royce. Interestingly, the foresight within The Walt Disney Company is integrated into the organizational culture. I can say that in total there are around 500 people that were trained across the globe. Today I can say that strategic foresight is a mindset that people within different levels of the organization have. At Rolls Royce for example, they treated it as a one-off workshop that was provoked by a similar by scale crisis for the company in 2014- 2015, as the 2020 pandemic. Out of necessity, they decided to work on scenarios for the future. As far as I know, until today, they are still validating their strategy against the scenarios that they’ve created. To add to that, I’m sure that the scenarios are constantly updated respectfully. What’s interesting is that governments, governmental institutions also use foresight and there are famous examples, as the government of Singapore, which has been using it since the 80s. I am also quite fascinated by the interest in foresight in the Middle East as UAE and Saudi Arabia. All these countries have been overly reliant on oil and they are trying to diversify and lessen their dependency on oil, which in our case means looking at different ways to explore the future. What they do is, they don’t just create a specific team that is isolated working on future scenarios, but they try to integrate the knowledge within their organizations by training different teams to have these capabilities and skill set. Probably here is a good moment to add that I am partnering with The Futures School and we organize different trainings. I have seen a lot of increased interest now, during the COVID situation. Which is a good sign, showing that people are taking this as an opportunity to build a better future and gain a new skill set that can help them do that.

Maria: Our team was lucky enough to have a strategic foresight training last summer, and this is the pre-Covid-19 era. It looked like a fun training, we enjoyed it. Now from the perspective of what’s happening I see much more importance of this kind of preparation of companies and governments and investing in those kinds of skills I believe it’s a must nowadays. As of the time of this publication, we have been in isolation for more than four months. Reflecting on what happened in the last months I’ve been more and more thinking about the concept of Strategic Foresight. Were we prepared? Were the governments prepared? What did we do right and what did we do wrong?

Looking forward with the past in mind

Joana: First of all, I think that we tend to want to have control over everything and we tend to want to forecast with a hundred percent certainty that something is going to happen or not. I don’t think we can have that 100% certainty. I think, rather, we need to find ways to embrace uncertainty and Strategic Foresight is exactly the tool helping companies to navigate through this uncertainty and be prepared. We are overly reliant on historical data and in many cases, we’re using outdated tools, which have worked fine in the past in a simpler world, but in the world, we live in today, we need to upskill and have different sorts of tools. We often focus on past data and try to extrapolate to the future as if nothing is going to change externally, which gives us a sense of control. But in fact, that actually may mislead us because of external forces and we are not able to predict threats or find opportunities when looking into the past.

How can you become a futurist?

For anyone interested in gaining strategic foresight skills you can sign up to the upcoming 3-Day Applied Foresight Accelerated Training provided by the Futures School that will be happening on September 22, until September 24. And for companies or governments interested in getting advice and support with their future planning, I have partnered with United Partners to provide consultancy in this area. You can always reach me via email: or visit www.futures-forward.com to learn more about Strategic Foresight.

You can hear our dedicated podcast on the topic of Scenario Planning here.